LAS CRUCES - Photographer Jesse Ramirez brings a fresh viewpoint, a storyteller's sensibility and high-tech skills to everything he shoots.

A shot of intricate Persian embroidery designs are superimposed as tattoos on a human body for a rug ad. A shrimp and garnishes balance acrobatically on a fork for a food feature. A fashion ad features a chic model toting a handbag that looks like, and in fact is, a shot of a real fish, transformed into a fashion accessory via Photoshop.

The emotional maelstrom of a wedding day is captured as a sharply focused image of a loving couple emerges from a blurred background.

From wedding portraits to landscapes and gritty slice-of-life vignettes for travel features, to slick, surrealistic commercial shots, Ramirez brings an artist's sensibility to his eclectic assignments. 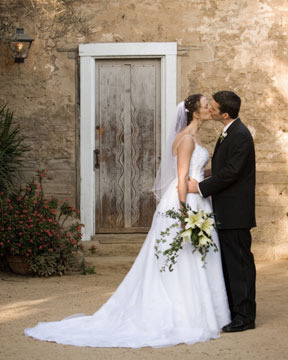 Ramirez captures the emotions of a day in this wedding photo of Brett Juskalian and Tara Miele from Los Angeles. He said the image will be the cover of a music CD to be featured at all Target Stores.

"Jesse has an amazing eye. His technological skills are superb, too. And when he styles a photo, it's always something wonderful, something you never could imagine, something only Jesse could imagine," said photographer Cecilia Lewis, who worked with him when Ramirez volunteered to help with the Fresh Eyes Photography project, a program to teach photography skills to incarcerated youths.

Ramirez understands the power of an image. One of his favorite shots shows a colorfully dressed Kuna woman in the remote San Blas Islands, proudly showing off a photo he took with a digital camera and processed immediately on a battery-powered portable printer.

"Those of us who live in a highly technological society forget the impact and value that a simple photograph can have. It was the greatest gift I could share with them. A photograph of oneself or ones's family is an invaluable possession in a community like San Blas. It is a record of existence , a preservation of time that they did not possess before, a way to hold their memories in their hands."

He learned "Al-lay!", the Kuna word for smile, he said, and found large crowds assembling to be photographed and watch the printing process.

"Mothers primped their babies and young girls donned the family's communal jewelry and best clothes. Although we shared no common tongue, the enjoyment and fascination the Kuna expressed while watching their images merge from this tiny machine created a connection between us."

Ramirez said he felt privileged to be able to share "the power of photography that we take for granted. Though this experience I rediscovered all that is magical about photography."

A Kuna worman savors the instant gratification of a portrait Jesse Ramirez shot and printed for her and other members of her community in the San Blas Islands.

Ramirez grew up in the artist community of Carmel, Calif, inspired by the work of now-legendary photographers who once lived there, including Ansel Adams, John Sexton, Ryuijie and Edward and Cole Weston.

He studied photography and design and earned a degree in cinematography from the prestigious University of California-Los Angeles School of Film & Television, where fellow graduate Rajeev Nirmalakhandan recruited him to help with the feature film "Chooch."

He worked on other independent films, exhibited his work and had success with southern California commercial photography projects.

"But after a bad break up, I decided I didn't want to turn 30 living in an apartment in Hollywood. I liked Las Cruces and decided to move here, to get out and have some different adventures. I felt comfortable here," he said.

He had read that Las Cruces is a good place to retire and to start a small businesses, he said.

He reports his parents decided to move here when they retire and he has started his own studio and is so busy he sometimes has to turn down business.

"Las Cruces has been really good to me. I'm so slammed with commercial work I've had to turn down three things this week. I'm also doing work for a stock photography company and I've really been enjoying working for magazines and print media," said Ramirez. His other enterprise, la foto bella Wedding Photography, captures the big day for couples with a documentary approach.

He just learned that one of his wedding photos will be the cover of a CD that is part of a music CD collection that will be featured at all Target stores.

His work has appeared in American Photo and Heart magazines. He recently did a cover for Sabrosa Magazine and has other editorial projects in the works. 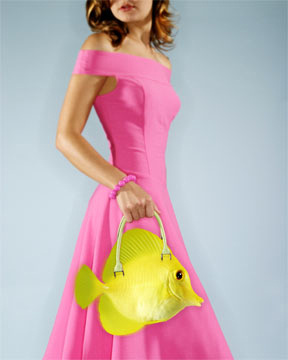 Jesse Ramirez transformed a photo of a real fish into a purse for this fashion ad.

"It's kind of a Photoshop boot camp," said Ramirez. "It's really rewarding to teach. I'm not really a person who likes to be the center of attention, but I like getting to hang out with a bunch of students."

These days, he prefers still photography to cinematography, he said.

"I like the idea of capturing an image. I'm flexible, but this is what I like now. I guess I still don't know what kind of photographer I'm going to be. I enjoy changing it up."

For more information on Ramirez's fine arts, commercial or wedding photography call 915 504 9509 or e-mail Jesse @J-Ramirez.com. To see portfolios of his work, visit online at www.lafotobella.com or www.j-ramirez.com.

S. Derrickson Moore can be reached at [email protected]